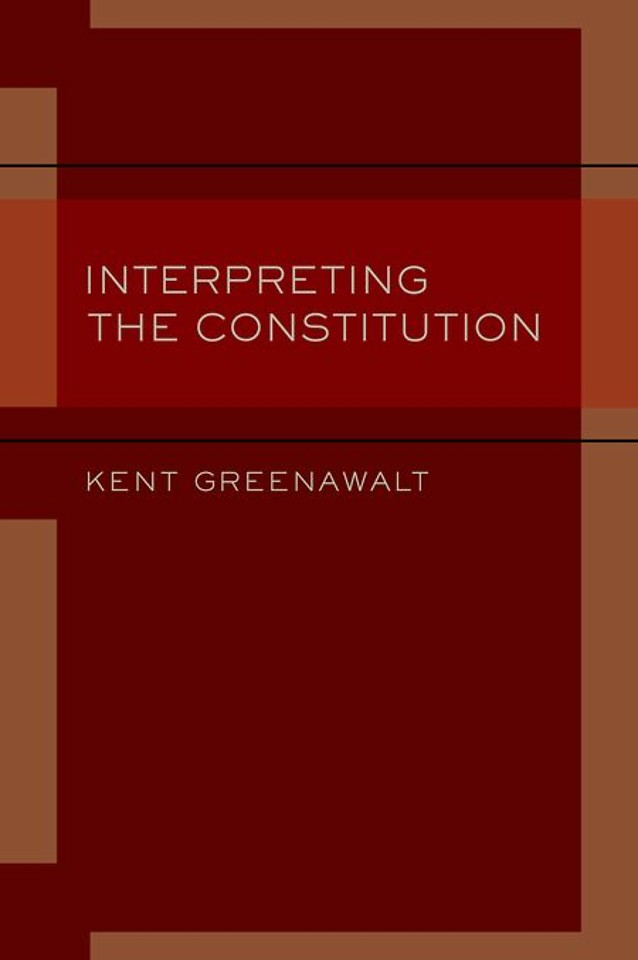 This third volume about legal interpretation focuses on the interpretation of a constitution, most specifically that of the United States of America. In what may be unique, it combines a generalized account of various claims and possibilities with an examination of major domains of American constitutional law. This demonstrates convincingly that the book's major themes not only can be supported by individual examples, but are undeniably in accord with the continuing practice of the United States Supreme Court over time, and cannot be dismissed as misguided.

The book's central thesis is that strategies of constitutional interpretation cannot be simple, that judges must take account of multiple factors not systematically reducible to any clear ordering. For any constitution that lasts over centuries and is hard to amend, original understanding cannot be completely determinative. To discern what that is, both how informed readers grasped a provision and what were the enactors' aims matter. Indeed, distinguishing these is usually extremely difficult, and often neither is really discernible. As time passes what modern citizens understand becomes important, diminishing the significance of original understanding. Simple versions of textualist originalism neither reflect what has taken place nor is really supportable.

The focus on specific provisions shows, among other things, the obstacles to discerning original understanding, and why the original sense of proper interpretation should itself carry importance. For applying the Bill of Rights to states, conceptions conceived when the Fourteenth Amendment was adopted should take priority over those in 1791. But practically, for courts, to interpret provisions differently for the federal and state governments would be highly unwise. The scope of various provisions, such as those regarding free speech and cruel and unusual punishment, have expanded hugely since both 1791 and 1865. And questions such as how much deference judges should accord the political branches depend greatly on what provisions and issues are involved. Even with respect to single provisions, such as the Free Speech Clause, interpretive approaches have sensibly varied, greatly depending on the more particular subjects involved. How much deference judges should accord political actors also depends critically on the kind of issue involved.

After earning a graduate degree at Oxford and attending Columbia Law School, where he was editor in chief of the law review, Kent Greenawalt served as law clerk to Justice Harlan and began teaching at Columbia Law School. With brief stints as a visitor at All Souls College, Oxford, and Deputy Solicitor General, he has been teaching at Columbia for 50 years. As a scholar he has written multiple articles and 15 books, the majority of which Oxford has published.

Part I: General Themes
1. The Nature of Constitutions: Basic Questions about Their Interpretation
2. Multiple Interpretive Criteria
3. Original Understanding: What Is Relevant and How Much Does It Count?
4. Employing Multiple Standards
5. Neutral Principles or "Objective" Standards: Their Relevance and Attainability

Part IV: Individual Rights and Norms of Equality
9. Freedom of Speech and the Press
10. The Religion Clauses
11. Criminal Process: The Right to Counsel, Unreasonable Searches and Seizures, and the Privilege against Self-Incrimination
12. Equal Protection