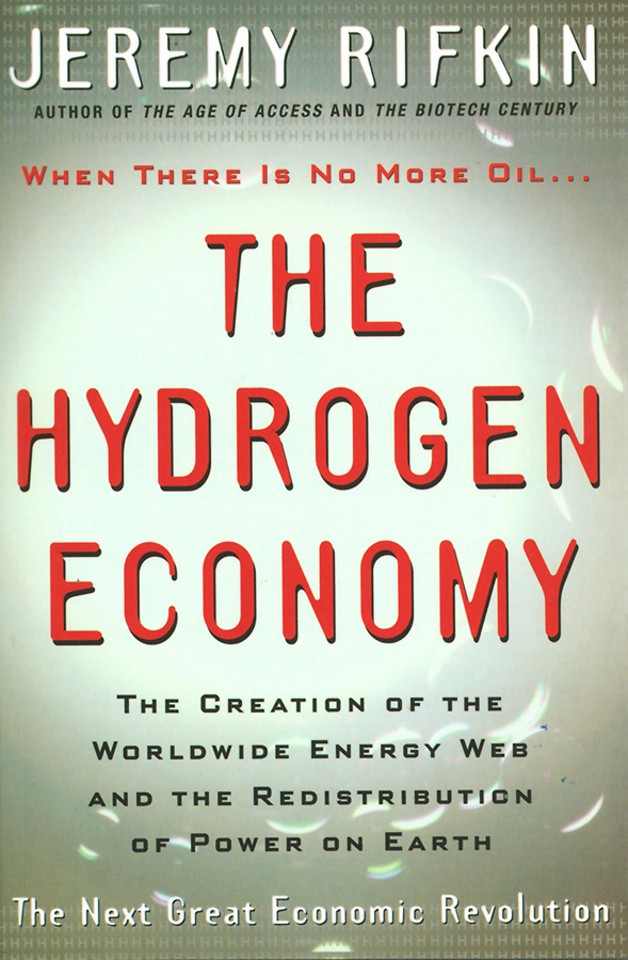 In The Hydrogen Economy, best–selling author Jeremy Rifkin takes us on an eye–opening journey into the next great commercial era in history. He envisions the dawn of a new economy powered by hydrogen that will fundamentally change the nature of our market, political and social institutions, just as coal and steam power did at the beginning of the industrial age.
Rifkin observes that we are fast approaching a critical watershed for the fossil–fuel era, with potentially dire consequences for industrial civilization. Experts had been saying that we had another forty or so years of cheap available crude oil left. Now, however, some of the world?s leading petroleum geologists are suggesting that global oil production could peak and begin a steep decline much sooner, as early as the end of this decade, sending oil prices through the roof.
While the fossil fuel era is entering its sunset years, a new energy regime is being born that has the potential to remake civilization. Hydrogen is the most basic and ubiquitous element in the universe. It is the stuff of the stars and of our sun and, when properly harnessed, it is the "forever fuel." It never runs out and produces no harmful CO2 emissions. Commercial fuel–cells powered by hydrogen are just now being introduced into the market for home, office and industrial use. The major automakers have spent more than two billion dollars developing hydrogen cars, buses, and trucks, and the first mass–produced vehicles are expected to be on the road in just a few years.
In the new era, says Rifkin, every human being could become the producer as well as the consumer of his or her own energy – so called "distributed generation." When millions of end–users connect their fuel–cells into local, regional, and national hydrogen energy webs (HEWs), using the same design principles and smart technologies that made possible the World Wide Web, they can begin to share energy – peer–to–peer – creating a new decentralized form of energy use.
Hydrogen has the potential to end the world?s reliance on imported oil and help diffuse the dangerous geopolitical game being played out between Muslim militants and Western nations. It will dramatically cut down on carbon dioxide emissions and mitigate the effects of global warming. And because hydrogen is so plentiful and exists everywhere on earth, every human being could be "empowered," making it the first truly democratic energy regime in history.

Chapter 1: Between Realities; Chapter 2: Sliding Down Hubbert s Bell Curve; Chapter 3: Energy and the Rise and Fall of Civilizations; Chapter 4: The Fossil–Fuel Era; Chapter 5: The Islamist Wildcard; Chapter 6: A Global Meltdown; Chapter 7: Vulnerabilities Along the Seams; Chapter 8: The Dawn of the Hydrogen Economy; Chapter 9: Reglobalization from the Bottom Up