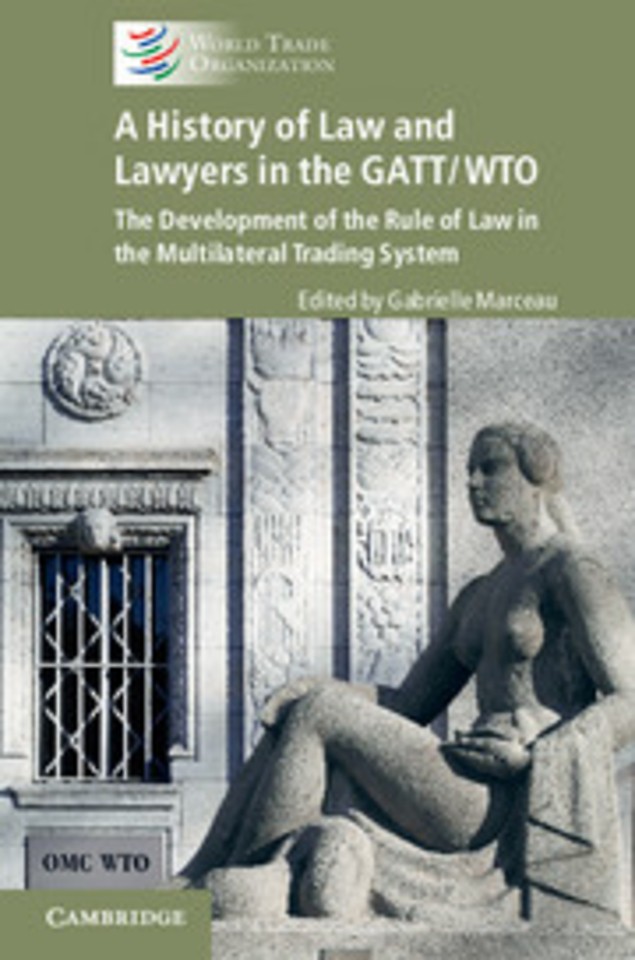 A History of Law and Lawyers in the GATT/WTO

How did a treaty that emerged in the aftermath of the Second World War, and barely survived its early years, evolve into one of the most influential organisations in international law? This unique book brings together original contributions from an unprecedented number of eminent current and former GATT and WTO staff members, including many current and former Appellate Body members, to trace the history of law and lawyers in the GATT/WTO and explore how the nature of legal work has evolved over the institution's sixty-year history. In doing so, it paints a fascinating portrait of the development of the rule of law in the multilateral trading system, and allows some of the most important personalities in GATT and WTO history to share their stories and reflect on the WTO's remarkable journey from a 'provisionally applied treaty' to an international organisation defined by its commitment to the rule of law.

1. Introduction and overview; 2. Moving towards an international rule of law? The role of the GATT and the WTO in its development; Part I. The Role of Law and Lawyers in the GATT System: 1948–92: Infancy: Reflections on the Origins of Legalization in the GATT: 3. We were young together: at the GATT, 1956–8; 4. Law and lawyers in the multilateral trading system: back to the future; 5. Towards a GATT legal office; 6. A short history of the rules division; Childhood: the Tokyo Round and the establishment and work of the first legal office: 7. Remembrance of things past: my time at the GATT; 8. The first years of the GATT legal service; 9. Early dispute settlement in the GATT; 10. GATT dispute settlement practices: setting the stage for reform; 11. The role of law in international trade relations and the establishment of the Legal Affairs Division of the GATT; 12. From the GATT to the WTO: a personal journey; 13. The establishment of a GATT Office of Legal Affairs and the limits of 'public reason' in the GATT/WTO dispute settlement system; 14. Evolving dispute settlement practice with respect to anti-dumping in the late 1980s and early 1990s; Part II. Legal Work after the Entry into Force of the WTO: 1993–5: Adolescence: Transition from the GATT to the WTO: 15. The Legal Affairs Division and law in the Uruguay Round and the GATT; 16. Taking care of business: the Legal Affairs Division from the GATT to the WTO; 17. From the GATT to the WTO: the expanding duties of the Legal Affairs Division in non-panel matters; 18. The WTO Dispute Settlement Body: procedural aspects of its operation; Young adult: the WTO as a formal international organisation: 19. Making law in 'new' WTO subject areas: competition policy and government procurement; 20. The meat in the sandwich; 21. From theory to practice: drafting and applying the Dispute Settlement Understanding (DSU); 22. WTO panel composition: searching far and wide for administrators of world trade justice; 23. Legal counsel to the administration: a legal adviser who should not look like one; 24. Outside looking in, after many years on the inside looking out; Part III. The Changing Legal Character of the Multilateral Trading System: 1996 to Today: Adulthood: The Quasi-Judicialization of the Panel Process by the Rules and Legal Affairs Divisions: 25. The first years of WTO dispute settlement: dealing with controversy and building confidence; 26. From Seattle to Doha: from the surreal to the unreal. A personal account; 27. Extending the scope and strengthening the legitimacy of WTO dispute settlement and some personal recollections Bruce Wilson; 28. Working in WTO dispute settlement: pride without prejudice; 29. The meaning of everything: the origin and evolution of the GATT and the WTO analytical index; 30. When science meets law: the rule of law in the development of the panel's expert consultation process; Gaining maturity: the appellate body and the impact of the appellate review on the development of international trade law: 31. The founding of the appellate body; 32. The authority of an institution: the appellate body under review; 33. Launching the appellate body; 34. Revisiting the appellate body: the first six years; 35. Not in clinical isolation; 36. The appellate body in its formative years: a personal perspective; 37. Reflections on the functioning of the appellate body; 38. A country boy goes to Geneva; 39. Contribution of the WTO appellate body to treaty interpretation; Part IV. Looking Ahead: New Challenges and Opportunities: 40. Advising the Director-General: brevity is the soul of wit, even for a lawyer; 41. The Legal Affairs Division at thirty and beyond; 42. Will the increased workload of WTO panels and the appellate body change how WTO disputes are adjudicated?; 43. Concluding remarks.

A History of Law and Lawyers in the GATT/WTO