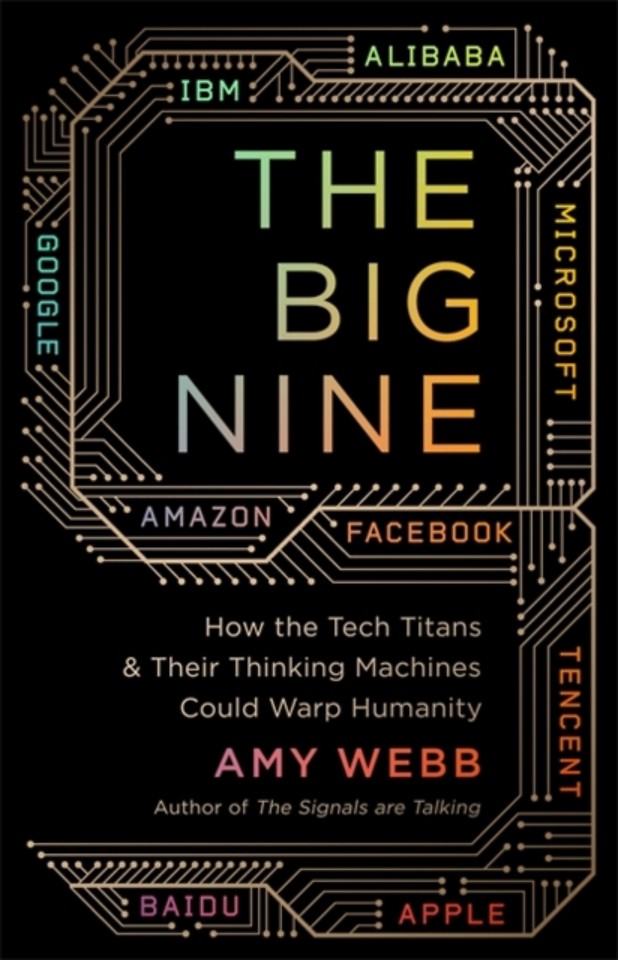 Amy Webb is a quantitative futurist whose research focus is on artificial intelligence and how emerging technologies will transform the way we live, work, and govern.

How the Tech Titans & Their Thinking Machines Could Warp Humanity

We like to think that we are in control of the future of 'artificial' intelligence. The reality, though, is that we-the everyday people whose data powers AI-aren't actually in control of anything. When, for example, we speak with Alexa, we contribute that data to a system we can't see and have no input into-one largely free from regulation or oversight.

The big nine corporations-Amazon, Google, Facebook, Tencent, Baidu, Alibaba, Microsoft, IBM and Apple-are the new gods of AI and are short-changing our futures to reap immediate financial gain. In this book, Amy Webb reveals the pervasive, invisible ways in which the foundations of AI-the people working on the system, their motivations, the technology itself-are broken.

Within our lifetimes, AI will, by design, begin to behave unpredictably, thinking and acting in ways which defy human logic.

The big nine corporations may be inadvertently building and enabling vast arrays of intelligent systems that don't share our motivations, desires, or hopes for the future of humanity. Much more than a passionate, human-centered call-to-arms, this book delivers a strategy for changing course, and provides a path for liberating us from algorithmic decision-makers and powerful corporations.

"The Big Nine is provocative, readable, and relatable. Amy Webb demonstrates her extensive knowledge of the science driving AI and the geopolitical tensions that could result between the US and China in particular. She offers deep insights into how AI could reshape our economies and the current world order, and she details a plan to help humanity chart a better course."―Anja Manuel, Stanford University, cofounder and partner RiceHadleyGates

"The Big Nine is an important and intellectually crisp work that illuminates the promise and peril of AI. Will AI serve its three current American masters in Washington, Silicon Valley and Wall Street or will it serve the interests of the broader public? Will it concentrate or disperse economic and geopolitical power? We can thank Amy Webb for helping us understand the questions and how to arrive at answers that will better serve humanity than our current path. The Big Nine should be discussed in classrooms and boardrooms around the world."―Alec Ross, author of The Industries of the Future

"The Big Nine makes bold predictions regarding the future of AI. But unlike many other prognosticators, Webb sets sensationalism aside in favor of careful arguments, deep historical context, and a frightening degree of plausibility."―Jonathan Zittrain, George Bemis Professor of International Law and professor of Computer Science, Harvard University

"The Big Nine is thoughtful and provocative, taking the long view and most of all raising the right issues around AI and providing a road map for an optimistic future with AI."―Peter Schwartz, senior vice president, Salesforce.com, and author of The Art of the Long View

Amy Webb is a quantitative futurist whose research focus is on artificial intelligence and how emerging technologies will transform the way we live, work, and govern. She is the author of The Signals Are Talking: Why Today’s Fringe Is Tomorrow’s Mainstream, a professor of strategic foresight at the NYU Stern School of Business, and the founder of the Future Today Institute, a leading future forecasting firm that helps leaders and their organizations prepare for complex futures. Now in its second decade, FTI advises Fortune 500 and Global 1000 companies, government agencies, large nonprofits, universities and startups around the world. Amy also publishes the annual FTI Emerging Tech Trends Report, which has now garnered more than 6.2 million cumulative views worldwide.

Introduction: Before it's too late

Part I: Ghosts in the machine
1. Mind and machine: a very brief history of AI
2. The insular world of AI's tribes
3. A thousand paper cuts: AI's unintended consequences

Part II: Our futures
4. From here to artificial superintelligence: the warning signs
5. Thriving in the Third Age of Computing: the optimistic scenario
6. Learning to live with millions of paper cuts: the pragmatic scenario
7. The Réngong Zhìnéng Dynasty: the catastrophic scenario

Part III: Solving the problems
8. Pebbles and boulders: how to fix AI's future