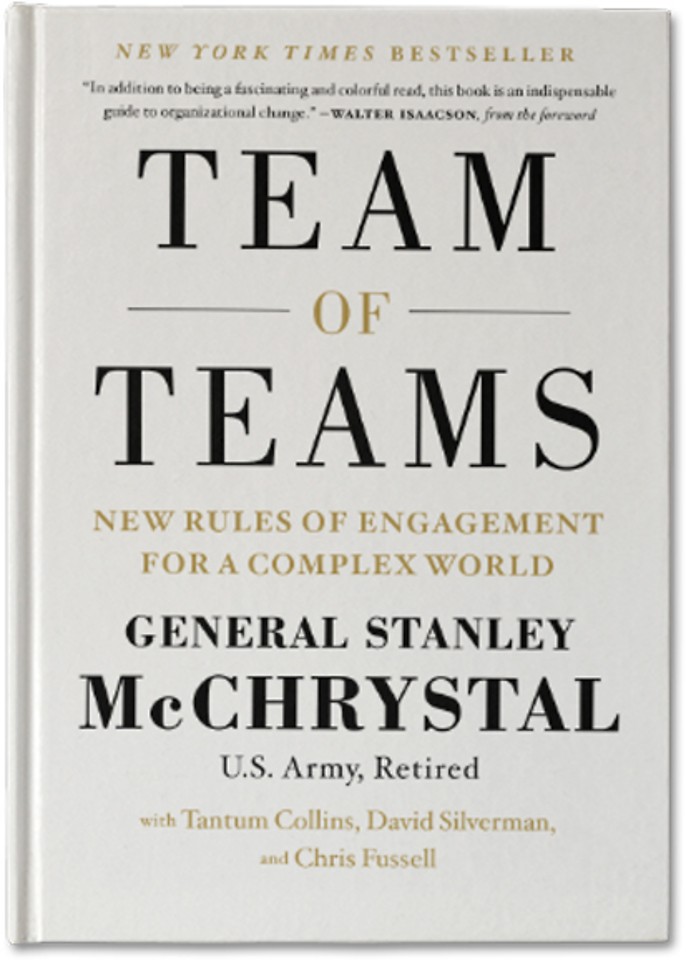 New rules of engagement for a complex world

When General Stan McChrystal took command of the Joint Special Operations Task Force in 2003, he quickly realized that conventional military leadership approaches were failing. Al Qaeda in Iraq was a decentralized network that could move quickly, strike ruthlessly, and seemingly vanish into the local population. The allied forces had a huge advantage in numbers, equipment, and training—but none of that seemed to matter.

To defeat Al Qaeda in Iraq, McChrystal and his colleagues discarded a century of conventional wisdom and remade the task force, in the midst of a grueling war, into something new: a network that combined transparent communication with decentralized decision-making authority. The walls between silos were torn down. Leaders looked at the best practices of the smallest units and found ways to extend them to thousands of people on three continents, using technology to establish a oneness that would have been impossible even a decade or two earlier. The task force became a “team of teams”—faster, flatter, more flexible—and beat back Al Qaeda.

In this powerful book, McChrystal and his colleagues show how the challenges they faced in Iraq can be relevant to countless businesses, nonprofits, and other organizations. The world is changing faster than ever, and the smartest response for those in charge is to give small groups the freedom to experiment while driving everyone to share what they learn across the entire organization. As the authors argue through compelling examples, the team of teams’ strategy has worked everywhere from hospital emergency rooms to NASA and has the potential to transform organizations large and small.

'In addition to being a fascinating and colorful read, this book is an indispensable guide to the organizational change and deep appreciation of teamwork that is essential in today’s fast-moving environment.'
—Walter Isaacson, CEO of the Aspen Institute

'Team of Teams is a compelling theme for our era. It’s an aspiration and a destination. As [the authors] write, ‘we all have to take a leap of faith and dive into the swirl.'
—Robert Safian, editor of Fast Company

'The lessons and concepts outlined in Team of Teams provide a valuable blueprint for leadership across any industry or domain. The principles of classical leadership struggle to deal with today’s pace of change, free-flow of information, and the entrepreneurial spirit of the digital generation. Team of Teams harnesses these new realities as assets, providing a leadership framework to produce the inclusiveness and adaptability of a fast-moving start-up, at the scale of any size organization.'
—Brad Smith, president and CEO, Intuit

'Team of Teams is erudite, elegant, and insightful. An unexpected and surprising wealth of information and wonder, it provides a blueprint for how to cope with increasing complexity in the world. A must read for anyone who cares about the future—and that means all of us.'
—Daniel Levitin, author of The Organized Mind: Thinking Straight in the Age of Information Overload