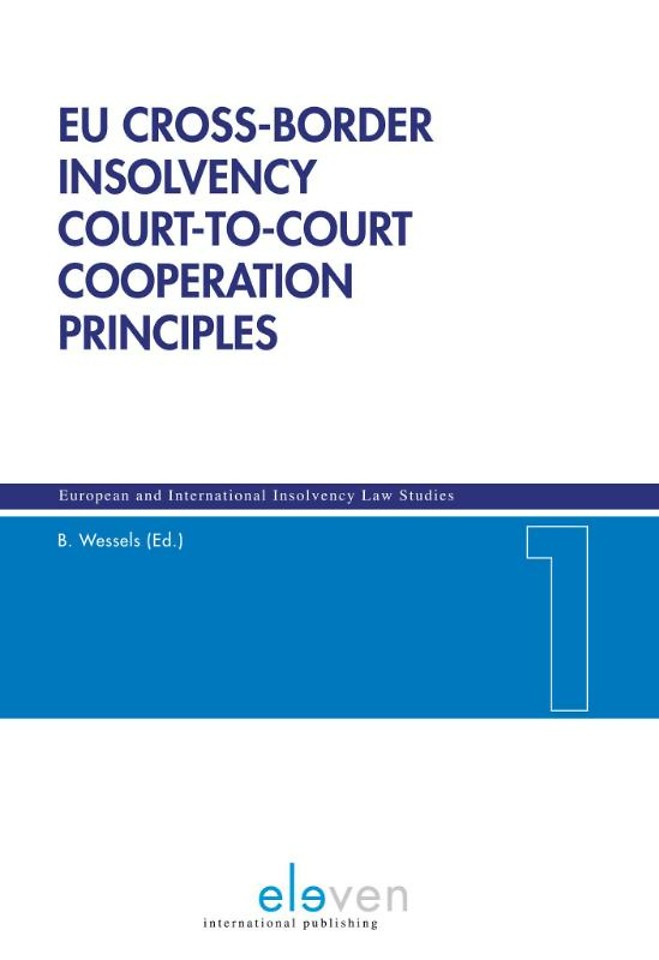 Bob Wessels is Professor Emeritus of International Insolvency Law at the University of Leiden (The Netherlands).

This publication contains a set of 26 EU Cross-Border Insolvency Court-to-Court Cooperation Principles ('EU JudgeCo Principles') and 18 EU Cross-Border Insolvency Court-to-Court Communications Guidelines ('EU JudgeCo Guidelines'). These EU JudgeCo Principles will strengthen efficient and effective communication between courts in EU Member States in insolvency cases with cross-border effects. They have been produced in a period of two years (2013-2014), developed by a team of scholars of Leiden Law School and Nottingham Law School, in collaboration with some 50 experts, including 25 judges representing just as many different EU countries. The principles are set in EU stone, in that they especially function within the framework of the EU Insolvency Regulation. The texts have been aligned with the text of the recast of the Regulation, as published early December 2014.

The EU JudgeCo Principles try to overcome present obstacles for courts in EU Member States such as formalistic and detailed national procedural law, concerns about a judge's impartiality, uneasiness with the use of certain legal concepts and terms, and, evidently, language. The texts further build on existing experience and tested resources, especially in cross-border cases in North America, but tailor-made into an EU insolvency law context.

Bob Wessels is Professor Emeritus of International Insolvency Law at the University of Leiden (The Netherlands). He held that chair from 2007-2014. He has been Professor of Commercial Law at the Vrije University Amsterdam from 1988-2008. He has over 40 years of experience as an independent legal counsel and arbitrator, provided expert evidence for cases in Belgium, Greece, Ireland, Poland, Sweden, Switzerland, UK and USA, and acted as consultant to the International Monetary Fund and the World Bank. From 1987-2016 he has been a Deputy Justice at the Court of Appeal (The Hague, The Netherlands). He is a Fellow of the American College of Bankruptcy, member of the American Law Institute and the European Law Institute, Honorary Member of INSOL Europe and Chairman of the Conference of European Restructuring and Insolvency Law (CERIL). Since 2010 he has been Expert Counsel to the European Commission in matters of restructuring and insolvency. Interviews Oude oplossingen populair in kredietcrisis naar aanleiding van het symposium 'De kredietcrisis: stand van zaken en wat staat er nog te gebeuren' van de Juridische PAO in Leiden.